The store will not work correctly in the case when cookies are disabled.

What’s the minimum size of broken detectable plastic that can be detected with a metal detector?

There is no straight forward answer to this question, as the answer is dependent on a) the type of plastic used in the detectable product b) the type of metal detector used to inspect the food and c) the type of food being processed. Each of the above three factors can affect the probability of detectable plastic being detected, as such it is unsafe practice to make general assumptions, and each application must be looked at on a case by case basis.

It is recommended that end users test any detectable product and fragments of it on their inspection system prior to introducing the product in production areas.

As a very general rule of thumb, a typical food industry metal detector will be able to detect detectable plastic fragments seven times the size of its ferrous detection limit. This rule of thumb is applicable to BST XDETECT plastic, other brands of plastic may differ in their performance. This logic is illustrated in the points below:

A) Type of Product / Plastic

The type of plastic used to manufacture a product is chosen dependant on the product properties and how it is used. For example, some products need to be stiff, some need to be flexible. Sometimes the product doesn’t need to be a plastic at all, and a silicone or rubber material is used. In each case, the base material can only be loaded with a certain amount of detectable additives, before the mechanical strength of the material is compromised. If the mechanical strength of a material is compromised, the product is more likely to break, thus increasing contamination risks, rather than reducing them. As such, the detectable additive loading percentage is tailored around the base material, meaning that different types of plastics have different levels of detectability.

B) Type of Metal Detector

There are many brands and types of metal detectors available to food processors. Brands include Mettler Toledo, Fortress, CEIA, LOMA, Bizerba, Anritsu, Minebea Intec and many more. Although all use the same basic technology, performance does vary from brand to brand as such do their capabilities of detecting detectable plastics.

One of the key factors affecting the performance of a metal detector is the aperture size. (The aperture is the opening in the head of the metal detector, where the product passes through). The smaller the aperture, the more sensitive it can be. As such, processing environments making ready meals, nutraceutical products, sweets, ETC with smaller detector apertures will achieve better results than meat processors or bulk packed products with larger detector apertures.

Metals and detectable plastics aren’t the only thing that disrupt a metal detector, so can the actual food product being inspected. All food products have some sort of effect on the detectors magnetic field as it passes through – this is why your metal detector has to be calibrated to recognise the product ‘signature’.

Most metal detectors are equipped with a photo sensor that is triggered as a product approaches the detector head on a conveyor belt. Once triggered, the metal detector expects to see a product signature throughout a specific time period, as defined when calibrating your metal detector. The systems knows to ignore this signature, and only look for anomalies (that could be contaminants) within that signature.

Newer metal detection systems are smarter and can analyse signals with more reliability and precision than ever before, resulting in more detections and fewer false rejects. However, the stronger the product signature, the harder it is for the metal detector to distinguish potential contaminants within it. For that reason, it is harder to detect small contaminants within certain foods that are wet, fatty or salty. These foods are more electrically conductive, typical culprits include Cheese, Meat, Pickles, Jam etc. Foods with less of a product effect include flour, dried pasta, chocolate etc.

Although there is no straight forward answer to ‘What’s the minimum size of broken detectable plastic that can be detected with a metal detector?’, the one in seven rule does give end users an idea of what to expect in terms of performance. However BST advise that one should not make assumptions about performance, and to carry out in house testing taking into account the type of detectable plastic, type of metal detector and type of food.

With a wide selection of food grade detectable raw materials to choose from, a solution to your problem is never far away.

Preventing foreign body contamination is at the frontline of food safety and detectable products manufactured by BST not only help toward this goal but also comply with international regulations and complement a company's HACCP systems. 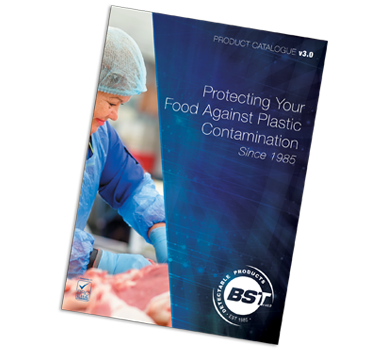